FREE Shipping
This item ships for free. Freight shipments include liftgate at no additional charge. Designed to be an instant source of hot water while not consuming large amounts of energy, this 52 Gal. Lifetime 4500-Watt Electric Water Heater with Durable 316l Stainless Steel Tank is ideal for installation in small areas. The stainless steel element provides minimum heat loss and provides a longer service life. The 52 Gal. tank provides you with plenty of hot water for every day applications.

Follow up to previous review titled "Great product idea if you can get one delivered without damage." It is now nearly two months since I ordered this water heater and it is still sitting in my garage damaged and unusable. I have been given the run-a-round by everyone involved in the transaction - Westinghouse, trucking company and Factory Pure. No one has done a thing to pick up this damaged water heater and refund my money. I had to have another water heater installed in the meantime and now I have paid for TWO. I am Factory Pure's customer and yet they keep passing this off to the shipper or trucker. I feel as a customer if you sell a product to me then I am YOUR customer. Whoever you buy the product from (or have it dropped shipped from) and the trucker that is contracted to deliver it are not my problems but rather yours. This is bad business and I warn you not to buy from Factory Pure as they will not stand behind the product they sell. They will punt you down the road to everyone else involved but take no responsibility for their sale. They should refund my money and file a claim against the manufacturer and shipper they contract with. This should not be my problem. You have been warned!!

I ordered the stainless water heater, excited to forgo anode rods and inevitable corrosion and at a good price from Factory Pure. However, by the time the water heater was delivered from across the country and transferred from truck to truck it reached me all banged up and unacceptable for use. The packaging from the factory is poor and referenced many times in internet reviews indicating similar damage on arrival to other customers. The shipper puts tight strapping material holding the heater to the pallet it is shipped on on only two sides and they do a good job of preventing things from contacting the heater. The two sides without pallet straps are consistently the sides that wind up damaged during transport. You would think the manufacturer would have figured out by now that a couple more cheap plastic straps would significantly reduce the chance of damage. I sent pictures of the damage to Factory Pure and the customer service was excellent. They apologized and indicated they would immediately notify the manufacturer who would then notify the carrier of the damage and presumably file a claim. I was asked if I wanted a replacement shipped or a refund instead. I chose the refund because to order another heater and have it shipped across the country in a similar manner would likely result in a similar outcome - unacceptable! Also, I was in need of a water heater NOW and to wait the lengthy shipping time again would cause me major problems. They accepted the refund choice and were to set that process in motion indicating the shipper would pick up the one I have to send back to manufacturer for refund. Unfortunately it is now more than two weeks later and no one has contacted me about picking up the damaged heater and my refund is non-existent. Factory Pure was contacted to notify them of the delay and lack of communication and were apologetic and shocked and said they would follow up on the claim. But now another week has gone by with no communication nor pick up the damaged heater. So, I recommend Factory Pure as a company but warn you against getting this shipped from the manufacturer because of the likelihood of it being damaged with the substandard packaging. At this point I have my fingers crossed that this eventually results in a refund and only a bad memory and aggravating transaction. We will see. 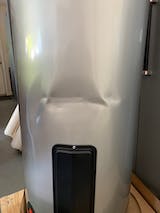 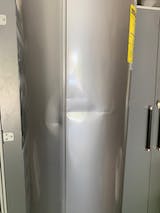 This is the second one I have installed. You can not get a better electric water heater. Lifetime stainless steel, just drain once a year to prevent sediment built up.