Ships Same or Next Day

If ordered by 12PM EST

Ships Same or Next Day||If ordered by 12PM EST Double the Summer Fun! You'll have twice the fun with the Twin Falls Lagoon! Make your way up the center climbing wall and pick a side to slide - both curved slides end with a refreshing splash in the lagoon pool. Take command of one of the two water cannons and have a blast cooling off your friends. With the continuous airflow blower, all this fun inflates in less than 3 minutes. With double the slides and double the water-blasting cannons, you'll have double the fun! Combined user weight limit- 150 lbs.

There are no warranties included with this product.

When I received the pool, it had a large hole in it near a seam. Banzai apparently knew it was defective, because they had attempted to sew on a yellow patch (see picture attached) which failed the first time we inflated it. This alone renders the pool virtually unusable. And given the location of the hole, we aren't able to patch it.

Upon contacting Factory Pure, they said that they had been in contact with the manufacturer, but since I bought the pool in April with the intent of using it in the summer, we weren't able to inflate the pool for the first time until mid-June. Which was apparently 3 days past the "30 day warranty" period, so the company won't refund or replace the pool.

Also to note - this was our fourth Banzai pool in 4 years. Typically they work great for the first year and then seams start to fail and they rarely make it to the second year. But the kids really love them so we keep buying them. Although this one will be our last since we spent almost $700 and never even got to use it.

Buyer be ware - this may be the worst customer service I have ever worked with when dealing with Banzai. BBB also has rated them with an "F". The pools are fun when they work, but I would never recommend somebody spend the money on these unless you just have money burning a hole in your pocket. 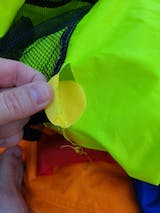 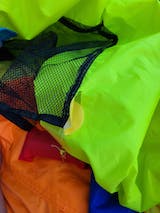 I would recommend researching more on buying a water slide that will last longer we’ve tried this water slide about 4 times and it already has some holes. Not sure if I would buy this again.

B
Brian Rogers
All Good!!

Large , well built. And easy to set up

A
Ashlee Portelli-Trinidad
Hole after a couple uses

The seam came undone on the sidewall after only a few uses.